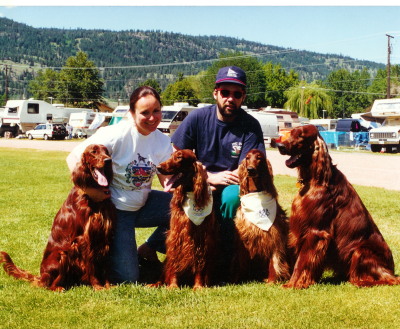 Achievements:  Carly was our first rescue.  As a three year old she had already been in 5 different homes who had decided she “just wasn’t working out” for unspecified reasons, and returned her to her breeder.  At that time we had our first “show dog” Colleen who was less than two, and we met Carly during a visit to the breeders.  We liked her right away and decided she needed another chance and that we would enjoy having two dogs.  We had some early issues.  Carly could leap any fence, was obsessed with birds, and absolutely ignored verbal commands since she’d never really bonded with anyone before. About the third time she escaped during a beach visit and we chased her forever up and down the beach after seagulls, we came up with a creative solution.   Colleen, although younger, outweighed Carly by a good 10 lbs.  Colleen and Laurie had been competing in obedience and Colleen was immediately responsive to commands.  So we tethered Carly to Colleen with a 6 ft leather leash.  Carly had to obey commands as Colleen would physically drag her back to us!  We kept them tethered together on all of our off leash jaunts (we camped and hiked a lot) for nearly 2 months.  By then Carly had accepted us as her family and could be trusted off leash anywhere.  She also was aggressive with cats, but with firm handling she learned our kitty was part of her family and she COULD NOT chase him (although she never totally gave up on chasing strange cats outdoors).  Carly was a wonderful companion going with Bob everywhere on construction jobs.  We entered our very first Hunt Test and Carly was a star.  Not just pointing the pheasant perfectly, but then chasing after it on flight, leaping up to catch it on the wing, and performing a flawless retrieve to a stunned Bob as if to say “gosh, why would you need a gun?”  This without any formal training – she just instinctively knew what she was supposed to do.  We have worked in Rescue ever since, knowing that with just a little patience and creative thinking every Irish Setter can become a wonderful companion.